Executive summary: very nice tour with 600km, 8 mountain passes and ca 17'000m of climbing, but unfortunately cut short by the weather, so the total is only 8 instead of 10 passes.

That's the stats, if you want to know more, read on...

I took the 9am flight from Zurich and arrived in Nice at 10:00am. My biggest concern was to assemble the bike and get out of the airport as soon as possible 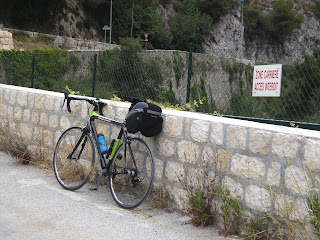 because it must be busy this time of the season (in France, vacation time started July 3rd).

However, I was pleasantly surprised when I found that NCE even had a bike assembly station inside the airport, with a stand and tools. Who would have thought ?

As you can see, I only had 2-3 kilos of baggage with me, attached to the saddle (no back pack).

Alors, I assembled my bike, passed customs and took off. First, the ride was along the shore (at 0 meters elevation), then through Nice, with a bit too much traffic and off I went into the mountains.

Once I found D19 towards Tourrette-Levens, traffic eased and the long but steady climb began. The ride was mostly through wooded areas, with lots of ups and downs and curves. Almost no traffic anymore, only other bikers.

After the Col de St. Martin (1500m), I had already booked a hotel at La Bolline and spent the night there. Very small place, but the good thing is it's quite high up so no air conditioning was needed. As a matter of fact, I spent all nights at altitudes over 1000m, so it was not too hot and not too cold. Just perfect !

The only thing that wasn't perfect was that the French (at least in the South) start their repas (dinner) at 7:30pm, so when I arrived (usually very hungry), I still had to wait for a few hours !

I 'fixed' this by having a late and long lunch (called dejeuner in France), so I would survive until 7:30pm...

Big day: today I wanted to ride 2 passes, the Cole De Bonnette and the Col de Vars.
But first things first. In the morning, there was a nice downhill from La Bolline to the junction with D2205. 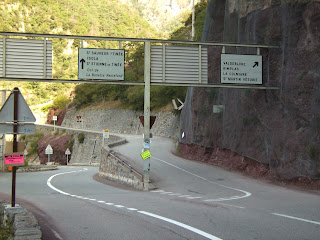 From there on, the climb to the Bonnette started. In the picture, coming down from Valdeblore, I took a right and started my ascent to Bonnette. This point is ca. at 500m, and Bonnette at 2802m, so a long climb of 2300m !

All the passes I did are not very steep, but the climbs are very long, at maybe 5-8%, and that wears you out, too ! I prefer steep climbs and long downhill rides :-)

The Col De Bonnette is the highest pass in Europe, but only because of a trick: some resourceful people (probably from the tourist office) added a loop around the top of Bonnette in the 60's, which added a few tens of meters, so Bonnette would surpass the Col de L'Iseran ! 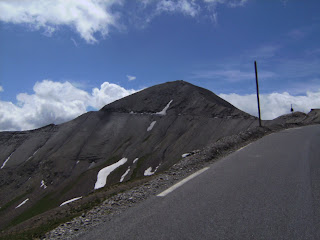 In the picture, one can see the loop starting and going around the top clock-wise.

In Jausiers, I unfortunately had a big ham and cheese toast, with a few cokes and beers and - as the experienced athletes among you will know - this was somewhat detrimental to my effort to climb the Col de Vars ! Only 800m to climb, but I had to walk my bike and push because of (a) my stomach and (b) cramps.

Note to self: tonight have loads of salt to avoid the cramps (binds the water in the body) and next time have spaghetti or something with carbs (and salt) for lunch !

Anyway, I made it to the top (even biking the last 1.5kms) and after a nice downhill spent the night at Vars (a mountain resort).

3 passes under the buckle and 7 to go, I had a nice downhill ride (that's the advantage of spending the night halfway up the mountain, you always have a downhill the next day!) to Guillestre. From here, the most beautiful pass, the Col de L'Izoard, started. In the picture below, you can see Brunissard, looking back. 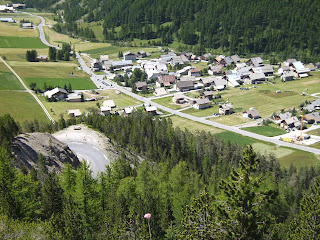 The road climbed nicely through a dense forest and later passed the famous Casse Desert (Broken Desert), which looks like a piece of the moon right before the summit of the Izoard pass.

At the top of the Izoard, there was a concession stand, offering drinks and souvenirs, and there were many motorbikes and bikes (and cars, too). However, the downhill was fantastic: roads in great shape and winded curves, excellent to cruise down.

The next pass (#5) was the Montgenevre, starting from Briancon. At only 600 meters of climbing, it would have been a nice pass, but the traffic was overwhelming. Maybe because it was Sunday, everybody (and their grandmothers) was on their motorbikes. And sometimes they just love to accelerate when passing bikers (the real ones :-))...

At least the hotel at the top was nice (Le Chalet Blanc), had a nice TV and so I could watch the Tour De France for that day.

The day started with a nice downhill to Cesana Torinese, and then on to Susa, Italy. But that was it in terms of niceness: the next climb up Mont Cenis was hard, because it started from 500m and went all the way up to 2100m, for a climb of 1600m.

In addition, once I could see the top (a bunch of hotels) through the fog, when I got closer I found out that there was a dam behind them, another 200m of climbing. Then I found out that the road didn't go alongside the lake, but climbed another hill, adding 200m again !

At the top, it was very cold and so I just put on a long wind breaker and rode the downhill into Lanslevillard where I had lunch (no ham/cheese toast though !).

I decided to ride a little further to Bessans and took a hotel there. 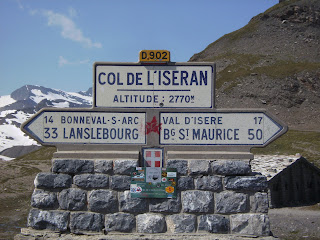 0m), which is the second highest mountain pass in Europe, only to be passed by the Bonnette (albeit through a trick, as mentioned above). However, I started at 1677m, so the actual climbing was only 1100m, much better than the 2300m for the Bonnette.
As once can see, I took the obligatory picture of the sign at the top of the pass, to prove that I was there :-)
Well, actually, I'm not in the picture, so... hmmm :-)

The downhill ride was very pleasant, through Val d'Isere, which is a famous winter sports resort and down to Montvalezan.

From here, I took a shortcut to the Petit St. Bernard, although it had a steep climb of up to 16%. The ride up St Bernard would have been nice because it features a mild climb of mostly 5% or less, but the wind at the top made it hard to reach the old monestary, which is at the top. 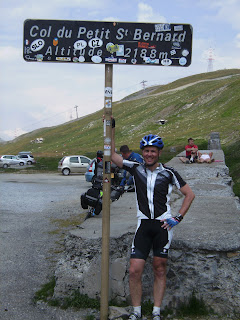 Here's the picture of me at the top.

The weather forecast had rain and storms for the evening, so I didn't stay too long at the top and made my way down to La Thuile, Italy (the Pt. St. Bernard is the border between France and Italy) and took a hotel.

Unfortunately, it rained the whole night and the forecast for where I wanted to go (Gr. St. Bernard and Furka (Valais) in Switzerland) was very bad (rain and thunderstorms), so I decided to finish this tour by heading west.

When the rain stopped, I rode down to Pre-Saint-Didier (Italy) and up the hill to Courmayeur (Italy). There I took a bus through the Mont Blanc tunnel into Chamonix (France again).

From Chamonix, I rode more or less A40 back to Geneva (Switzerland), where I took the train back home. The A40 is partially a 2 lane highway, but due to lack of other roads (very narrow valley), they allow bikes to use it. Hmm, not very pleasant to be passed by heavy trucks, you going at 65km/h and the trucks going at 100km/h...

Anyway, this was a great tour, friendly people everywhere, I practiced my French, and toured a beautiful scenery. I might just do it again some day ! Next time though, maybe with an iphone (or even better, an Android HTC phone !) and lots of plan B's: in some places they had no public transportation (besides the bi-weekly bus :-)) and I would have been stuck in that place had it started to rain...

If someone is interested in the exact tour, I have it on bikemap.net, let me know.
Cheers,
Bela
Posted by Bela Ban at 2:35 PM