How to hijack a JGroups channel inside Infinispan / JBoss ... (and get away with it !)

Have you ever used an Infinispan or JBoss (WildFly) cluster ?
If no --> skip this article.

Have you ever had the need to send messages around the cluster, without resorting to RpcManager offered by Infinispan or HAPartition provided by WildFly ?
If no --> skip this article.

Have you ever wanted to hijack the JGroups channel used by Infinispan and WildFly and use it for your own purposes ?
If no --> skip this article.

This is good when an application wants to reuse an existing channel, and doesn't want to create/configure/maintain its own channel, which would increase resource consumption.

Also, applications can create many (hundreds) of light-weight channels, as they don't use a lot of resources and are easy and quick to create and destroy.

Even better: if an application would like to add capabilities to an existing stack, e.g. atomic counters, a distributed execution service or distributed locking, then it can define the protocol(s) it wants to add and the private channel will add these. Again, the hijacked channel is unaffected by this.

There's documentation on this at [1], so let me show you how to hijack a channel inside of an Infinispan application. The application can be downloaded from [3].

The (original but edited) code that creates an Infinispan cache looks like this:

The code in bold was inserted. So what does it do ? It grabs the JGroups channel from the Infinispan cache, creates a light-weight (fork) channel  and runs Draw [5] over it. Draw is a replicated whiteboard GUI application. To explain this step-by-step:
The result is shown below: 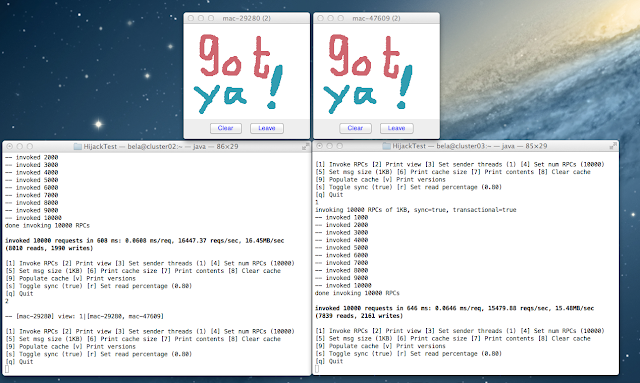 The hijacked application is a text-based Infinispan perf test (shown in the 2 shell windows). The hijacking Draw windows are shown above. Pressing and moving the mouse around will send multicasts of coordinates/color around the cluster over the fork channel, but the hijacked channel will not notice anything.

Seem like we got away with hijacking the JGroups channel after all ! :-)